Dec 2019. Do not usually have cause to come inbound on the A610 / Alfreton Road into Nottingham, but did have cause on 24th Dec, (having just bought an extraordinarily hi-vis pair of waterproof trousers from ScrewFix at Giltbrook. Was shocked at the state of the road surface at a number of locations so reported via the Nottingham Council website. The areas were vVery dangerous for cyclists, especially at night or after rain. There is little point in Nottingham Council encouraging people to commute by bike if this is what they find when they do so. 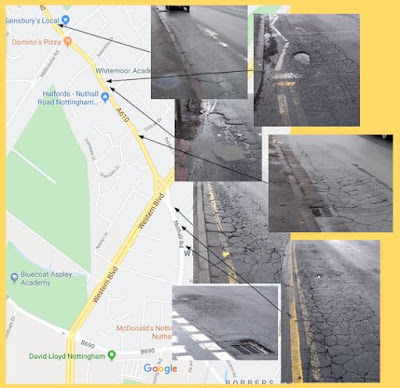 FS-Case-164007837 : Severe defects to road surface to the extent that cycling along this road (inbound), especially at night or after rain) is extremely dangerous.

FS-Case-164011795 : Broken and sunken road surface. Dangerous for cyclists, especially at night or after rain.

FS-Case-164010707 : Very broken and sunken road surface. Dangerous for cyclists, especially at night or after rain.

FS-Case-164009265 : Broken surface, loose gravel, potholes. To the extent that cycling here (inbound), especially at night or after rain is very dangerous (e.g. is that waterfilled pothole 2mm deep or 30mm deep - a cyclist has only seconds to decide, or should they veer out into traffic?)

FS-Case-164009933 : Broken and sunken road surface for an extended length of highway. Dangerous for cyclists, especially at night or after rain.

FS-Case-164011293 : Nasty pothole at drain (this has clearly been repaired recently) and sunken road surface a few metres on. Both dangerous for cyclists, especially at night or after rain.

Jul 2019 : "I know you're trying hard, @Transport_Nottm, @EMTrains, but the free ride-up-and-use cycling provision at Nottingham train station is dire. What is the plan to sort this out? Station staff want to help but have not been given accurate info." 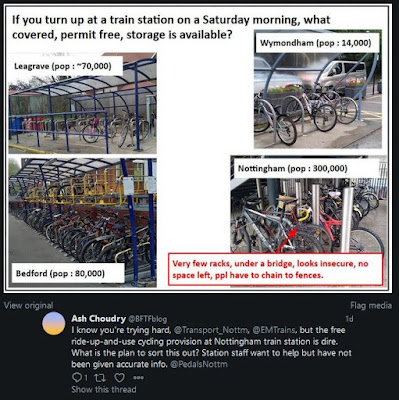 Response from Transport Nottingham : "When the changes were made to the Station, both the @EMTrains cycle hub and the citycard cycle hub were expanded. The intention was to move away from "toast racks" as there had historically been a high number of bike thefts in the area. So more secure bike parking was needed. As the racks under the tram stairs are well used there is clearly demand for more ad-hoc parking. We are looking at how we can accomodate this while ensuring a level of security for bikes left in the area."

Interesting data on cycle journeys on some roads in Nottingham. Noticeable how the numbers for Alfreton Rd (which is a major artery) are so low. Council comment that this may be due to a number of factors including good bus/tram services and and unpleasant experience on the road. As an aside, journey numbers on the new Castle Boulevard cycle path are often over 1000 per day. 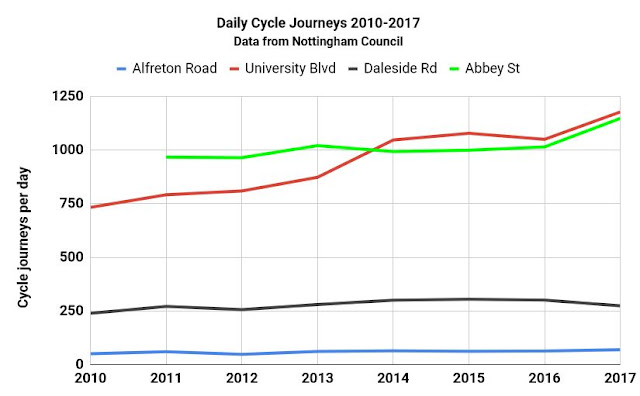 Tail end of a FB conversation with Transport Nottingham on cycling through Jubilee Island:

TN : A member of cycle team has been out to have a look at this and thinks that more could be done to improve viability for cyclists re-joining the road on Wollaton Road after using the toucan crossings across Western Boulevard....we’re drawing up plans to add in a drop curb further along so cyclists joining the road will have a better view of traffic coming off the roundabout.

Ash : Thanks for this positive response, I really apppreciate the dept taking the time to actually go and look at the junction, and to propose improvements. That said, I think you might be missing a major hazard. If I understand correctly, the Councils recommended route is shown in Green in the image below - but this takes cyclists through a narrow, blind choke point with a pedestrian crossing immediately after it...This must already be causing conflict with pedestrians, resulting in resentment and anti-cycle attitudes. I'm not sure safety through this choke point can be maintained in the future if the number of cyclists increases significantly.


TN: Thanks your comments which we would agree with. If we are successful in getting funding to improve the Ring Road we will be working with design engineers from Sustrans to look at options as well as our own engineers, traffic signal engineers and road safety team. Our team has been compiling a list of potential schemes and issues that we want to address as part of a work package to improve the Ring Road. This has been added to that package.

Really love this little piece of cycling infrastructure in Nottingham. This little gap in the barrier allows cyclists to avoid having to cross two lanes of heavy traffic on Jubilee Island. Instead cyclists can use the safe pedestrian crossing and then nip through this gap and rejoin the carriageway and continue their journey. Every time I use it (which is every working day) I smile and say thank you to whoever thought to create the gap.

You can let Nottingham Council know about potholes and other road defects at: www.nottinghamcity.gov.uk/report-it.

And you can email the cycling dept at cycle.city@nottinghamcity.gov.uk 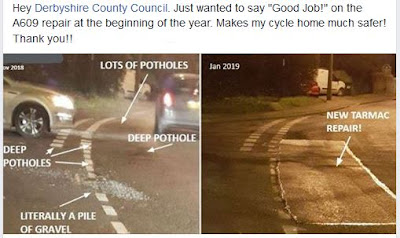 May 2019 : Posters from @Pedals regarding cycle barriers: 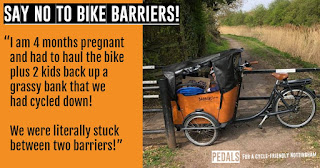 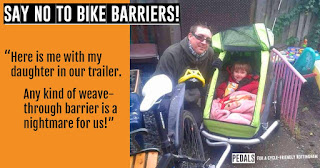 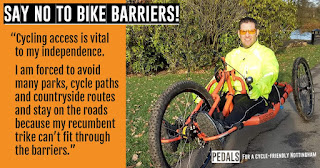 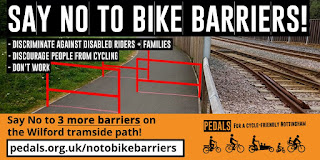 Update Jul 2019 : A cycle campaigner updated that "Woke up to a nice email today from Rushcliffe council. After the pedals demonstration and the meeting I had with the council afterwards, we got the barriers changed so that people with disabilities, cargo/child trailers and tandems can all use this worth while shared asset"

The email from the council also comments that "The Council is looking at creating a Public Space Protection Order to give greater enforcement action against motorcyclists, but we can only do this if we can prove there is "persistent and continuing use" and this will require us to monitor the issue going forward before we can take further action"

Dec 2018 : Respect to Derbyshire County Council for the job the roads team have done resurfacing the Ilkeston A609 / A6007 roundabout (top of dual carriageway). REALLY SMOOOTH. No drops at the drains. Makes cycling much safer. Colleague comments that they could "cycle round it all day"!

Lots of stuff on the Nottingham Council Website about cycling:
https://www.transportnottingham.com/cycling/

Resurfaced Birdcage Walk makes cycling along this route much easier than the previous lumpy surface.


More on this project here : https://www.transportnottingham.com/projects/river-leen-multi-user-path-improvements/

"Detail of outcome
The main outcomes are that [the Government] will:
i) review the existing guidance in the Highway Code to improve safety for cyclists and pedestrians
ii) invest £100,000 to support police enforcement by developing a national back office function to handle dash-cam footage
iii) improve enforcement against parking in cycle lanes
iv)appoint a cycle and walking champion
v) encourage local authorities to increase investment in cycling and walking infrastructure to 15% of total transport infrastructure spending
vi) engage with cycling and walking bodies to develop a behaviour change campaign

Jul : Tending Cycle Paths
Sent a Tweet to Notts Council to say thank you for this...

I'm hoping you can reassure me that Nottingham Council would never be so insane as to install "Killer Armadillos" on the roads of our fair city.

Because that it what they have done in Salford and, as an occasional cyclist, they scare the living daylights out of me!

They are manufactured by Cyclehoop, whose range of products is otherwise awesome - so its a bit odd that they have had such a brain-fail with the Armadillo.

Beezodogsplace talks about them here.

By pure chance it turned out that BFTF was cycling to work on National Cycle to Work Day, so took the opportunity to ride home the scenic way, via the Nutbrook Trail and Erewash Valley Trails. Some pics and bloggage below!

BFTF joined the Nutbrook trail at Shipley Country Park. The Nutbrook Trail follows the route of the dismantled Stanton railway branch line, which no doubt explains is gentle gradients...


The Erewash Valley Trail is the result of funding and development by a range of partners, including :


BFTF is very grateful for their foresight and perseverance in making this wonderful trail a reality.