A post describing some of the stuff the 92nd Nottingham Scout Group get up to! (more on Notts Scouts here)

May 2014 : Another trip to Walesby, with many other Scout groups

April 2014 : Some outdoorsy pictures
Some pictures from a variety of recent camping trips etc:


Mar 2014 : World Book Day!
For World Book Day, some of the Scouts did a rather clever thing - they each started a story, then passed it to the next scout to them who added a bit more before passing it to the scout next to them...and so on. So at the end of the session, there were six stories, to which each of the scouts had contributed. The Scout leader has kindly allowed BFTF to print one of the stories here...

THE EVIL VACUUM by the 92nd Nottingham Scouts

Once upon a time there was a boy called Jimmy. He was in love with his Dyson, but little did he know it was evil!!! One day he brought it out from it's hidey hole and pluggged it in. It roared to life. Hoovering a giant dust bunny, something happened. The Dyson went crazy and began to hoover up Jimmy. He screamed for help but it was no use. Jimmy was gone...

....To his surprise be found himself in the Dyson, a brand new world. He went on amazing adventures to different parts of the Dyson...

...But, of course, he thought it was stupid, and he wanted to get out. He tried speaking in French, "Je suis tres cool". He tried burping (that's what they did in Charlie and the Chocolate Factory!) He tried dancing, boogying around. He tried blowing the most amount of balloons he could. But now it got to him...He had to FART his way out. 5.4.3.2.1...BLAST OFF. He could feel his bum carrying him away...

...He was in a weird space time zone. Dun Dun Dun : "I'm in farting space". Bang - what was that? It was...a fart! He was approaching the land of Scotland. Everyone existing there stated fainting and feeling sick. 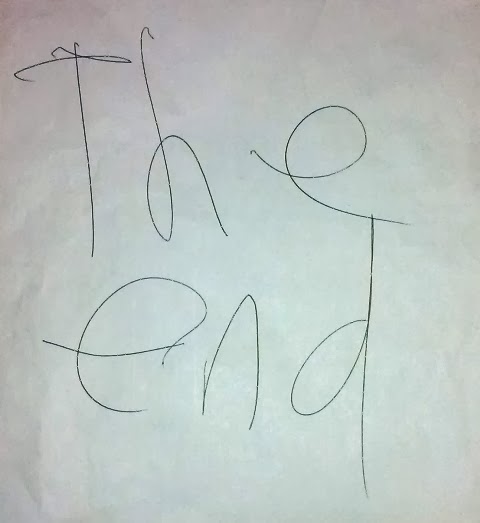 Mar 2014 : Various activities
A bunch of stuff from recent months that never got to the blog at the time...

Jan 2014 : Bag packing at Asda
Very early January 2014 saw the 92nd Scouts Group fundraise £357 by bag packing at Asda Hyson Green. No3 Son was part of the team and commented that "Most of the people I packed for were kind and polite....I met a Brownie leader who asked about my Sherebrook toggle...At the end of the day I felt good because I had helped more people than I expected...About a third of the people I met let me pack their bags but the majority of people donated...I discoverd that I pack bags quite quickly!"

Big thanks to Asda Hyson Green for facilitating this event - which, aside from the fundraising aspect, has a number of social benefits for the scouts and in terms of building community cohesion.

And of course to the Scout leaders for putting together a complicated schedule describing which Scouts were wanted at ASDA at what specific times!

BFTF sent an email to Angie (Community Life Champion at Asda Hyson Green) to say thank you, and also a Tweet to Asda saying the same!...

...and a bunch of Tweets saying "Thank You" to the wonderful residents of Hyson Green for being so kind and supportive of the 92nd Scouts Groups efforts!

Autumn 2013 Part 1
How the Scout Leaders manage to organise so much cool stuff is something that BFTF is always amazed at, and the Autumn 2013 session was no exception to this.

Hightlights included orienteering in Forest Park (in the dark !), with one of the scout leaders commenting that the girls seemed to be much better at this that the boys because they focussed on the task at hand while the boys tended to get distracted.

A trip to Wallesby Scout Camp also featured for the Beavers, in which they had the chance to take part in activitied such as archery.

While another hit was a session of Laser Tag at Quasar in Nottingham.


Autumn 2013 Part 2
After the move to the Pakistan Centre (bless the team there for being so welcoming!) the goodstuff continued, with multiple outings and a visit by "Uncle BMX" from Forest Fields to show the kids how to fix bikes.


A feeling for how much hard work and imagination the team leaders put into the Scout Group can be gained from looking at what was happening on just one day - 28th November:
One group was playing football
Another group was making glove puppets for their creativity badge
Yet another group was learning sign language for their communications badge
While a futher group was thinking about the difficulties faced by disabled, especially blind people.

Spring / Summer 2013
Spring 2013 brought, amongst much else, a camping trip for the scouts.

And Summer 2013 included presentations by Dr Sam Tang on chemistry and Professor (!!) Paul Nathanail on geology and, at the request of the 92nd Scout leaders, also on on knots!

One of the Scout leaders said that Sam and Paul (who held their demonstrations on different weeks) really got the full attention and interest of the children, and that they were much quieter that might have been expected at school.

Whilst collecting No1 and No3 sons from Scouts a couple of weeks later, BFTF was charmed to see that the kids had made ginormous "Thank You" cards for Sam and Paul...


There was also some rather nifty marching going on...


And here the Scouts were playing with the foam generated by a lump of dry ice subliming in a tub of warm soapy water. As you do....


Schedule for Autumn 2012
Well done to the volunteers at the 92nd Scout Group for organising a suberb set of activities for the Autumn 2012 term!

If you want to help the 92nd Scout Group be all it can be - please volunteer! Just an hour every week - if given with reliability - can make a big difference.

Are you playing your part in creating a strong society by volunteering? If not, here is your chance!

Ultimate Frisbee (14 Jun 2012)
This week, the 92nd Scouts Group got a visit from the University of Nottinghams' Ultimate Frisbee team. The team, with seemingly endless enthusiasm, taught the Scouts how best to throw, catch(apparantly, one should sandwich the frisbee between both hands) and pass a frisbee. No3 sons comment : "Interesting"


Trip to the Tennis Centre (14 Jun 2012)
Taking advantage of the Nottingham Tennis Centre's "Festival of Tennis", the 92nd Scout Goup took a trip to the centre and had the chance to watch some professional tennis and take part in some tennis traing sessions. It really was non-stop action with No3 Son commenting "It was amazing"


Jubilee Party (07 Jun 2012)
Jubille fever hits the 92nd Scout group this week, with a special Jubilee party ! Food, entertainment and a disproportionate number of balloons were there!

Liiter Picking and the Global Challenge(26 Apr 2012)
Today the 92nd Scout Group embarked on their "Global Challenge" badge. The Beavers were taking part in a quiz about countries and their capitals (did you know that the capital of Angola is Luanda?), while the Cubs and Scouts were litter picking in Forest Park.


St George's Day March (21 Apr 2012)
The weather held off just long enough for a great St Georges Day parade in Nottingham City Centre. The 92nd Scout group were able to put their marching practice into. . .er. . .practice. The Scouts undertook a circular march from the Castle, around the market square and back to the Castle for a group promise. Good effort small people!


Preparing for St Georges Day parade(19 Apr 2012)
Today the 92nd Scout group, including the younger beavers and cubs, spent time preparing for the St Georges Day march on Saturday 21st April as they will be marching alongside all the other scout groups in Nottingham before participating in a scout event at Nottingham Castle. But to march alongside others, you first need to learn to march - and teaching this skill was the task that the volunteer scout leaders had set themselves.

Yaseen, one of the Scout leaders, started with the basics by asking the Scouts to stand side by side in a line and then to walk across the hall while staying in formation.

How hard can that be? Surprisingly hard, as it turns out.

Between the differences in stride length amongst the Scouts and the hard-wired urge of the youngest ones to run instead of walking, it was a surprisingly tough task. Once the Scouts had started to make progress, it was time to take things to the next level and soon Yaseen had the Scouts responding well to “By the left quick march!”, “Group Halt!” and even “Atten…SHUN” (at which the Scouts were to stamp their left foot in unison).

The Scouts also spend some time preparing “St Georges Shields” for the march.

BFTF wishes them well for Saturday !

The Easter break saw the 92nd Scout group taking a really interesting trip around the innards of the Theatre Royal in Nottingham. Guided by David Longford and Caroline Pope from the theatre's education department, the scouts were taken on trip through time and space as David and Caroline described the history of the theatre and also took the youngster, literally, behind the scenes.

David and Caroline had a very interactive style and asked lots of questions of the youngsters, whose responses were fascinating. Aware that a "back-up" actor was called an "understudy", they quizzed David on what would happen if all the actors and all the understudys were ill, to which David had to admit that the play would probably be cancelled.

On the other hand, when asked which Queen was on the throne when the theatre was built in 1865, it took the clue that the monarch was known for wearing black before the wee ones chirped up "Victoria".

Taking advantage of the gorgeous weather, the 92nd Scout group were playing rounders on Forest Park today. It proved to be a really noisy event! The cubs, scouts and beavers really enjouyed themselves and there was plenty of "audience participation" from the scout leaders as they gave advice on whether the youngsters should stay or run to the next base. Indeed, it was almost like a surreal version of "Have you got your cards right" with "get back" and "run" replacing the "higher" and "lower" that the audience called out on Brucies famous show.

BFTF had the opportunity to tag along with Cubs from the 92nd Nottingham Scout Group today as they visited the Nottingham’s Progressive Synagogue.

The group was shown around the Synagogue by guide Tanya, who gave a really clear and interesting explanation of Jewish worship, what happens on the Sabbath and how the Torah is read.

It was also great to see the Cubs taking such an interest and asking so many questions.

One of the highpoints for BFTF were seeing the four Torah Scrolls and learning a little about the sad history of one of these, the Austerlitz scroll.

Another aspect of the event that touched BFTF was when Tanya read the Torah, which she did in a very beautiful, melodic way and sang some of the traditional Jewish religious songs (which the children could join in by clapping at the right points.

The architecture of the synagogue was also very beautiful, as can be seen (just) in the picture here.

BFTF certainly also appreciated that Tanya took the time and interest to ask, when covering a topic, to ask about the corresponding Muslims practice.